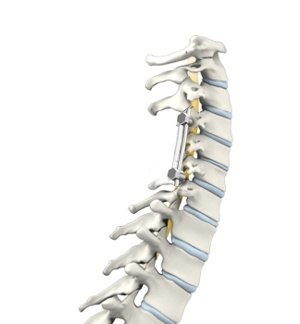 What is Posterior Cervical Fusion?

Posterior cervical fusion (PCF), a surgical procedure performed through the back of the neck, involves joining or fusing two or more damaged cervical vertebrae. The fusion of vertebrae is also known as arthrodesis. Sometimes, metallic plates may be used for fixing the vertebrae, this is also known as instrumentation.

PCF may be employed for the management of cervical fractures, bone dislocations and deformities due to an abnormal curvature of the cervical vertebrae.

The procedure is conducted in an operating room under general anesthesia. You will be made to lie face down on the operation table. A small incision is made over the center of the back of the neck. The muscles and the soft tissues are then retracted to approach the spine. X-ray imaging is employed to identify the affected intervertebral disc. The surfaces of the lamina of each vertebra to be fused are trimmed. This results in bleeding, which aids in rapid healing of the fused bones. In addition, small strips of bone graft taken from the pelvis are placed over the spinal column, which aids in the fusion of the bones.

Confirmatory X-rays may be taken to confirm the proper placement of the bone graft. Finally, the retracted muscles and soft tissues are placed in their normal positions and the wound is sutured.

You may be discharged from the hospital within a week of the surgery. A neck brace is recommended for several months; however, this restriction may not be required if the vertebrae are fixed with a metal plate during the PCF surgery. You are initiated on a liquid diet, which is gradually changed to solid food depending on your recovery.

Physical therapy is recommended after 4-6 weeks of the surgery. Physical therapists help you perform routine activities without exerting any extra stress on the neck. Rest is advised as it helps in healing of the bone graft.